“My faith in a loving Creator of the galaxies, so loving that the very hairs of my heard are counted, is stronger in my work than in my life, and often it is the work that pulls me back from the precipice of faithlessness.” – Madeleine L’engle, Walking on Water

That’s where I’ve been.

I’ve been reading Madeleine L’engle, and sitting on the precipice of faithlessness, legs flipped over the side, swinging my feet. I’m leaning over to catch a glimpse of the bottom.

When I asked a friend about her long-term plans after school, she said “I am not sure. I know something good will come out of all this, but I don’t know what that is. I do know, though, that I’m ok with whatever it is.

I believe something good will come of all this, and I’m ok with whatever that is.

That’s the edge I fell over.

I don’t believe something will come of all this.

I never believe something good will come of all this.

God is a task master, who demands things of us, and we have to obey–we have to get it perfect–or we won’t be safe and secure. He’ll “teach us a lesson” by taking away the things we love.

Where even the good things come with so many strings attached–so much difficulty–that they don’t really feel like the blessing I was begging for.

People remind me this is a season of change and transition.  They remind me that followers of Christ have a required, repeated pattern of death, burial, and resurrection.

Consistently, the Hope of resurrection eludes me.

Death and Burial I get.

I’ve had family in Arizona most of my life, but I’ve only been to the Grand Canyon once. It was on the way to Phoenix from Albuquerque during my move out to California.

It turns out you can drive right up to its very edge and look over. Getting out of the car, strolling through the Visitor Center, out the back door and there it was: Ten steps right to the edge. There’s no missing it–no mistaking this sight utterly beyond the reach of any superlative. 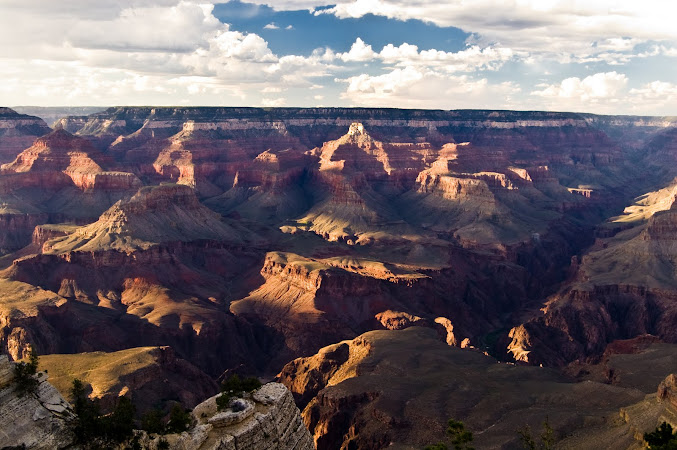 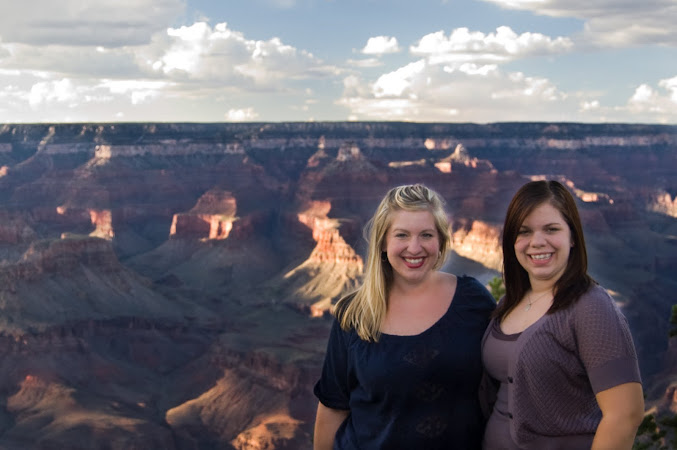 It was late afternoon. We couldn’t believe the fortune of our front row seats to the sunset event–curtain up daily. A cascading golden light repainted the facing red wall of the canyon auburn, magenta, and violet.

Nothing, absolutely nothing between us and that glory.

That’s what we got when we forgot to be afraid of being too far up or too far in.

We also watched a storm roll over the ridge. August heat and desert sunshine seared our side; over there, torrential skyfall chipped away at the other rim–suspended–almost as if the rain couldn’t leap over the chasm any more than we could.

It does something to you: beholding glory, beyond the reach of the storm, unscathed on the razor’s edge. 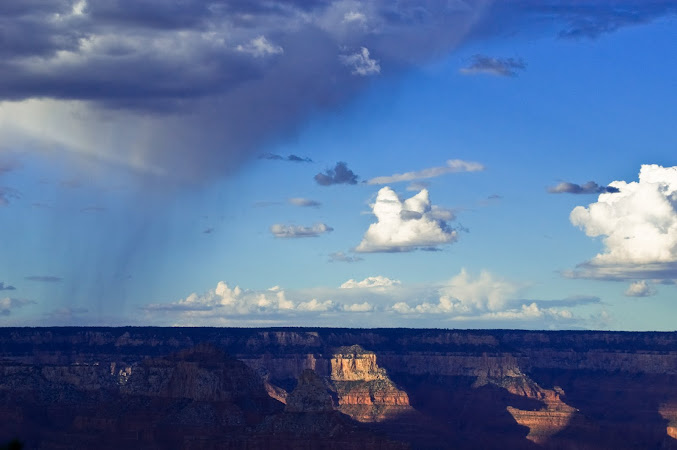 Later that night, as we were coming through the mountain pass on our way to Phoenix, in total blackness, the storm caught up with us. The wipers tore the rain off the windshield like the top of a can with a pull tab. White-knuckled, my sister used all her strength to keep the car from being blown off the road. We passed sign after sign that cautioned us about the violent winds and imminent flash floods–alerts so obvious in those terrifying conditions they felt ironic.

Those two hours were some of the scariest driving we’ve ever known. Nowhere to stop on tight mountain curves, no light, and no reprieve.

It turns out, the storm can cross the chasm.

And when darkness falls, and the storm catches up to you, light and relief may still be a long way out.

Where I’ve been lately reminds me of that trip to the Grand Canyon.

And the trip away from it.

My parents joke that they gave me a car in high school just so they could have something to take away when I needed to be punished. They had a “No Bs for keys” rule. This rule said we must have straight As on our grade report or they threatened to stop paying for my car insurance and I wouldn’t be allowed to drive anymore.

Then I got a B+ in AP Calculus when I was a Junior. Grades came out and there was a reckoning.

Given my adult relationship to numbers and math, I am actually proud of that grade now. At the time, I was so afraid. I remember trying my hardest, going to tutoring and still missing the mark. I also had two other AP classes, a mom who was sick, and a pile of extracurriculars. And I was 16.

They rescinded the punishment, but I figured only because without my car, they had to drive me to work and practice. It was more punishment for them if I could no longer run errands and drive my siblings to practices.

Then, one time, I blew a curfew I –honest to God– didn’t even know I had. I went to a friend’s birthday and we saw the new James Bond movie. He was a new friend and the party ran late because the movie ran late. In the era before cell phones, my parents were unable to reach me because they didn’t know his parents or exactly where I was.

By the time I got home, they were livid.

I was stunned. I was still back before midnight, which had been my curfew a few other times.

By having to quit my team, I really would be all the things they said I was.

He gives us good things so He can take them away and “teach us lessons.”

He holds us to standards we can’t meet.

When we do our best to obey, and miss the mark anyway, we have to resign the things we love because they are privileges we don’t deserve. If I had just somehow done that better, I would have been ok.

This is, apparently, what I actually believe about God.

I am sure my parents remember these events very differently, if they remember them at all. In fact, I think I got to finish the season on the drumline. Reason would suggest I learned all the wrong lessons here.

But that acknowledgement doesn’t treat what ails.

I know I have been told the absolute opposite about God and His Son and His never-ending love. I’ve been reminded that discipline is proof of sonship, and that both the “giving” and the “taking away” are gifts from a loving Father.

We were sitting at lunch today, and a friend was recounting a few episodes in high school where his finite teenage logic failed him.

“Breaking the window was my only choice. I was locked out. I had a basketball game to get to.”

Another friend recounted the time his dad was late picking him up, so he decided to walk home on his own. After walking for an hour and a half, he realized he was horribly lost.

Then we shared times where we packed up our stuff and “ran away away from home” out of frustration–you know, where we tie up all our belongings in a checkered tablecloth and relocate to the park, where life is better.

I chaperoned the Homecoming dance this weekend, and I rounded the corner to find a girl curled up, weeping.

I mean the ugly crying you don’t do in public.

I can relate. I haven’t posted anything because there’s been lots of fear, frustration, and ugly-crying lately.

People aren’t supposed to see that.

As a person who aims to minister with her words, it seemed my only choice was to go hide in the doorway of the locker room.

Because I don’t believe anything will come of all this.

But it’s the work that brings us back.

As teacher, I have a special role as a spectator to high school life. I can say to my students, “I see you. I hear you. I’m here with you.

I see what you see, but I see beyond it. You don’t even know how much you don’t know.

So I beg you to trust me when I assure you:

This is not all there is. There is real life beyond high school. Hang in there. We’ll make it through this year, together.

Believe me. I’m your teacher.”

I can’t find my way out of this.

I left because I was so mad. I was so mad you took that away. I couldn’t live with your expectations. The work is just so hard, and you left me here.

I’m hours off track. I thought I had only one choice, so I went my own way.

Can you please come get me now? I’m ready to come home.